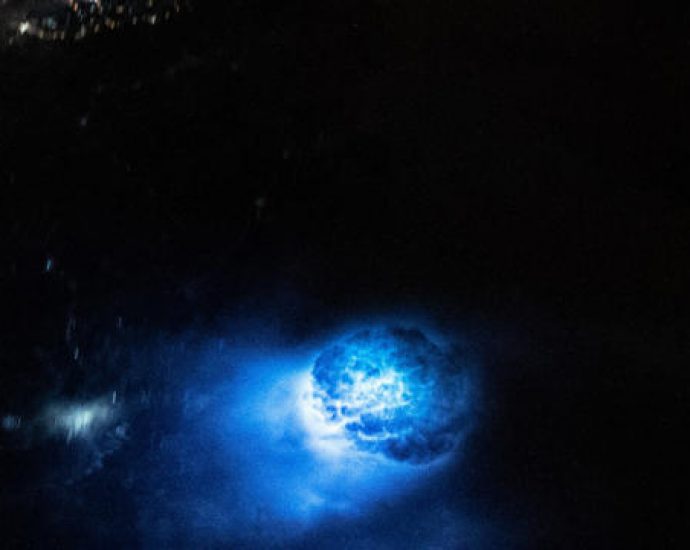 Bizarre blue blobs hover in Earth’s atmosphere in stunning astronaut photo. But what are they?

An astronaut onboard the ISS recently captured a peculiar image of Earth with two unrelated blue blobs of light shining in the planet’s atmosphere.

The first blob of light, which is visible at the bottom of the image, is a massive lightning strike somewhere in the Gulf of Thailand. Lightning strikes are typically hard to see from the ISS, as they’re usually covered by clouds. But this particular strike occurred next to a large, circular gap in the top of the clouds, which caused the lightning to illuminate the surrounding walls of the cloudy caldera-like structure, creating a striking luminous ring.

The second blue blob, is the result of warped light from the moon. The orientation of Earth’s natural satellite in relation to the ISS means the light it reflects back from the sun passes straight through the planet’s atmosphere, which transforms it into a bright blue blob with a fuzzy halo. This effect is caused by some of the moonlight scattering off tiny particles in Earth’s atmosphere, according to Earth Observatory.

2022-10-18
Previous Post: A gamma ray burst — possibly the brightest of all time — sweeps over Earth
Next Post: NATO send signal-jammers to Ukraine to counter Russia’s onslaught of explosive Iranian-made suicide drones
My Tweets